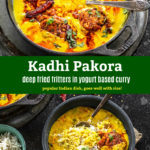 Punjabi Kadhi Pakora is one of the most popular North Indian dishes!

Deep fried fritters (pakora) are dunked in a yogurt based curry made with besan (gram flour) and spices!

I am sharing my absolute favorite way to make the best Punjabi Kadhi Pakora at home. 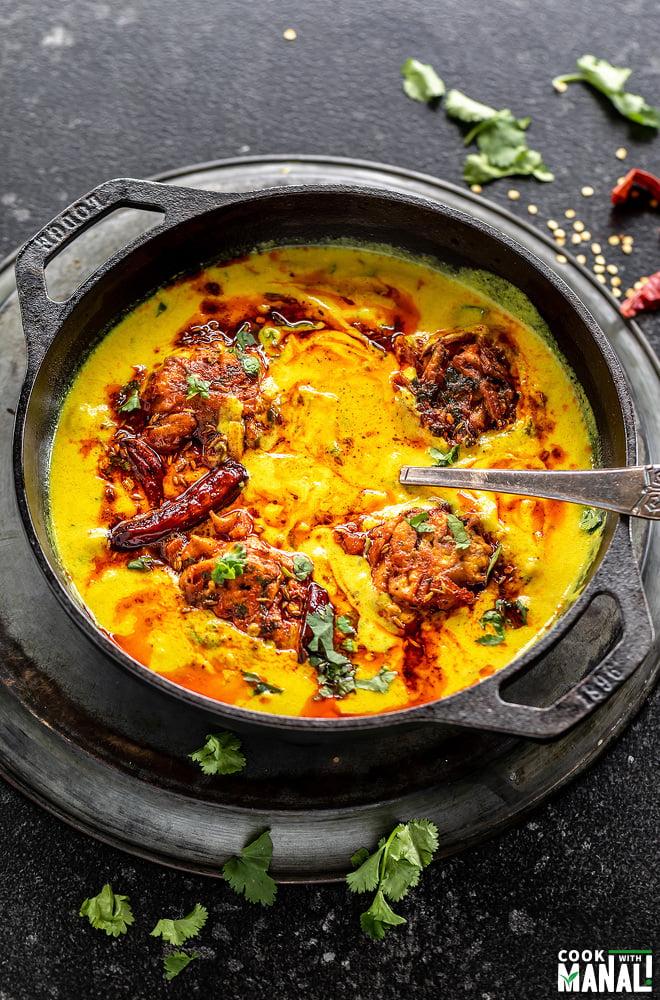 As far as I can remember, I have always been a kadhi fan.

I mean kadhi and chawal (rice) is the quintessential Delhi food. It’s hard to ignore it if your grew up around that area.

Kadhi for those who are not aware is a dish made with yogurt and besan (gram flour) typically.

It is made in different ways in different parts of the country, so there’s no one way to make it. They all use besan though, that’s one thing in common.

The punjabi version has fritters (pakora) and also has more besan, the Gujarati version is thinner, has less besan, no fritters and is also little sweet.

So, you see there’s no single way to enjoy kadhi. It depends which region of India you are from and which kind of kadhi you grew up eating.

I am sharing with you guys my favorite way to make Punjabhi Kadhi Pakora at home.

✔ tastes just like the one from your favorite dhaba.

✔ is spicy and so flavorful.

✔ has fritters made with onion and chilies.

✔ tastes even better the next day!

-yogurt (plain whole milk yogurt is what I prefer)

The batter made with yogurt and besan is tempered with spices and then cooked until it thickens and cooks completely. There should be no raw smell of besan once the kadhi is cooked and everything should just come together beautifully.

Kadhi also comes from the word “kaadhna” which means cooking on low heat for long time. So, longer you slow cook the kadhi, the better it tastes!

My mom always used methi seeds (fenugreek seeds) to temper her kadhi. Along with fenugreek, I also use cumin seeds.

Not a whole lot of ground spices are added to kadhi, the main flavor comes from the yogurt and besan cooked together. 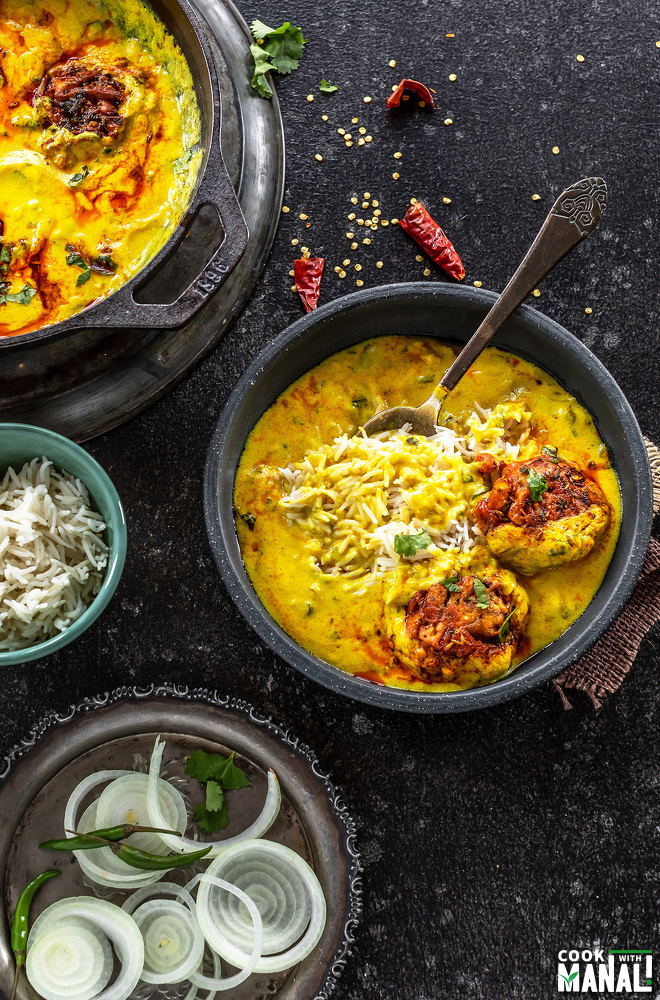 I have been making kadhi for many years now and now I am sharing what I have learned along the way and the tips that will help you make absolutely lip-smacking kadhi at home!

1. Start with more water: the kadhi has to simmer for a long time in order for it to develop flavors and become thick and creamy and for that you need to start with a lot of water.

In this recipe, I added 1/2 cup besan, 1.5 cups yogurt and 6 cups (1.4 liter) water. That might seems a lot of water but you need it so that the kadhi cooks down to the consistency you are looking for.

In fact, I had to add some water later on, so I would have very well done with another 1/2 to 1 cups water.

2. Use sour yogurt if possible: usually, I prefer using old yogurt for my kadhi. The one that isn’t freshly made and is tasting little sour.

That works best with punjabi kadhi. A good kadhi in my opinion should have a little tang and the sour yogurt just does the trick!

4. Use mustard oil to cook the kadhi: Okay, I know a lot of people do not use mustard oil that often. But in my house, my mom only cooked in this oil.

It adds so much flavor of it’s own. So try making kadhi with mustard oil and see the difference

6. Add onions and cilantro to the pakora: when my mom used to make kadhi, she would make plain pakoras with just besan and salt.

But I highly recommend adding onion, green chili, cilantro and few spices to the pakora to make it more flavorful.

I also add some yogurt and baking soda to the batter which makes the pakora soft and airy.

And the kashmiri red chili powder gives it a beautiful color on top. 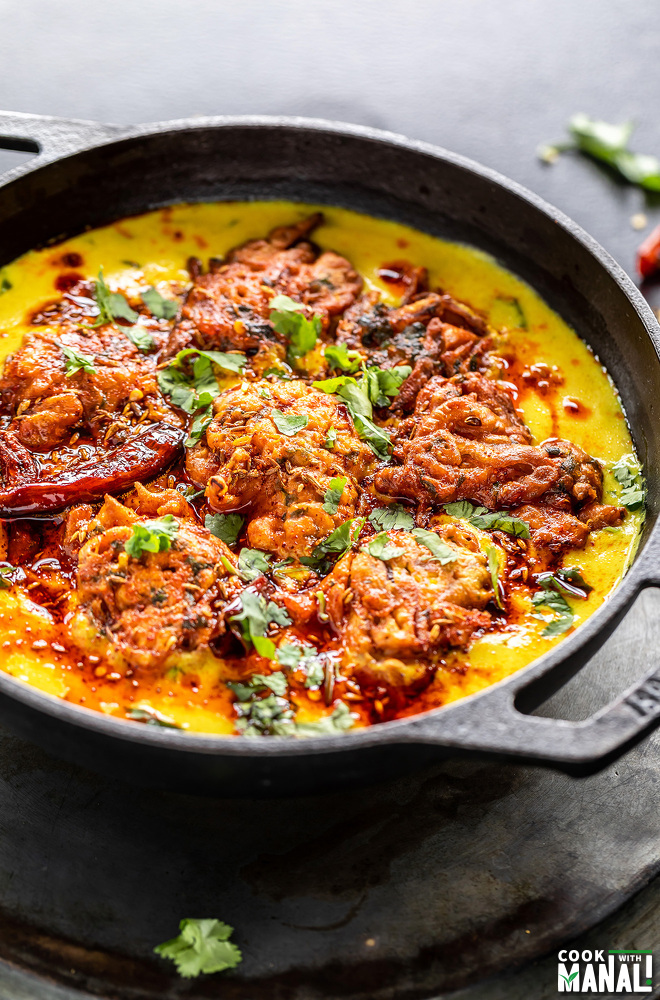 How to Prevent Kadhi from Splitting?

If you face this problem of the kadhi splitting/separating when you cook it, here’s what you need to do-

whisk the yogurt well before adding to the batter: I usually whisk the room temperature yogurt first and then add besan to it.

add the salt later: let the kadhi come to a boil and then let it cook on low heat for 15 minutes and then add the salt. Adding salt in the beginning might cause the kadhi to split.

This is optional, but if you are really concerned about the yogurt splitting, you may add a bit or cornstarch to the batter. The cornstarch binds the yogurt and prevents it from splitting. I don’t do it though and kadhi remains just fine.

I hope these tips help you to make Punjabi Kadhi Pakora at home like a pro!

2- Whisk until besan and yogurt are well combined.

4- Add 6 cups water (around 1.4 liters of water) and mix until it’s all mixed together. Set aside.

5- In a large and deep pan, add 2 tablespoons of mustard oil on medium-high heat. You can use any oil but mustard oil gives it a nice flavor.

6- Once the oil is hot (make sure oil is heated through else mustard oil gives a raw taste), add the methi seeds and cumin seeds. Let them splutter and then add hing.

Add the sliced onion along with chopped green chili and cook for 2 minutes.

8- Add the prepared besan-yogurt mixture into the pan. Now with heat on medium-high, stir continuously until the kadhi comes to a boil.

9- Stir continuously until the kadhi comes to a boil, then lower the heat to low-medium and let it cook for around 30 minutes. Keep stirring it in between.

10- Add salt after the kadhi has been cooking for 15 minutes or so. While the kadhi is cooking, make the pakora. 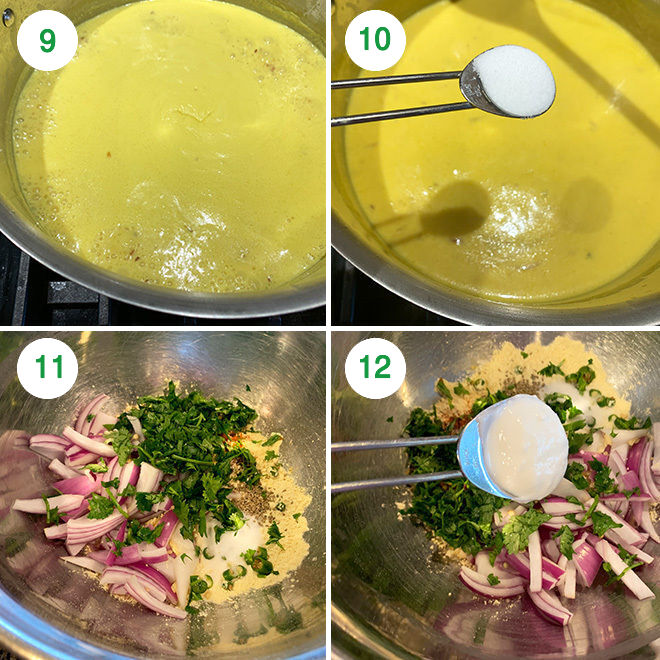 13- Start adding water, little by little to form a thick batter. It should not be very runny but not super thick either. I added around 1/4 cup and 2 tablespoons water.

14- Add 2 pinch of baking soda and mix the batter for a minute using your hands. This will make the pakoras nice and soft.

Meanwhile heat oil (around 2 cups) in a kadai on medium heat to fry the pakoras.

15- Once the oil is hot, mix the batter again for a minute using your hands and then start dropping the batter into the hot oil.

I take handful of batter using my thumb and four fingers and drop is straight into hot oil, you may use a spoon.

16- Let it cook and turn golden brown from one side and then flip and cook the other side. Make sure to cook on medium-low heat so that the pakoras cook nicely from inside too.

Cook until pakoras are golden brown from both sides. Drain on a paper towel.

17- After 30 minutes or so, kadhi would have considerably thickened and completely cooked. Add cilantro. You can little extra water here if kadhi looks too thick to you.

18- Add the pakora and transfer kadhi into a serving pan.

19- Heat ghee in a small pan on medium heat. Once ghee is hot, add 1/4 teaspoon cumin seeds and generous pinch of ajwain. Add 2-3 dried red chilies (you can break them for extra heat). 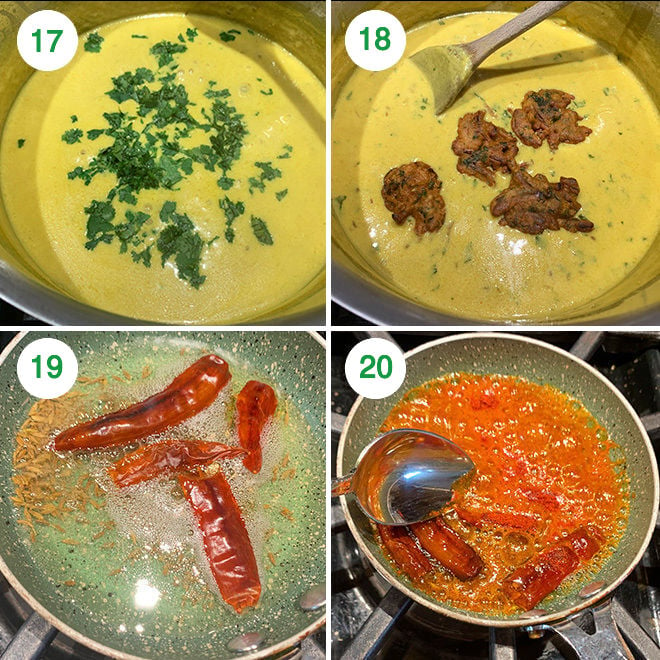 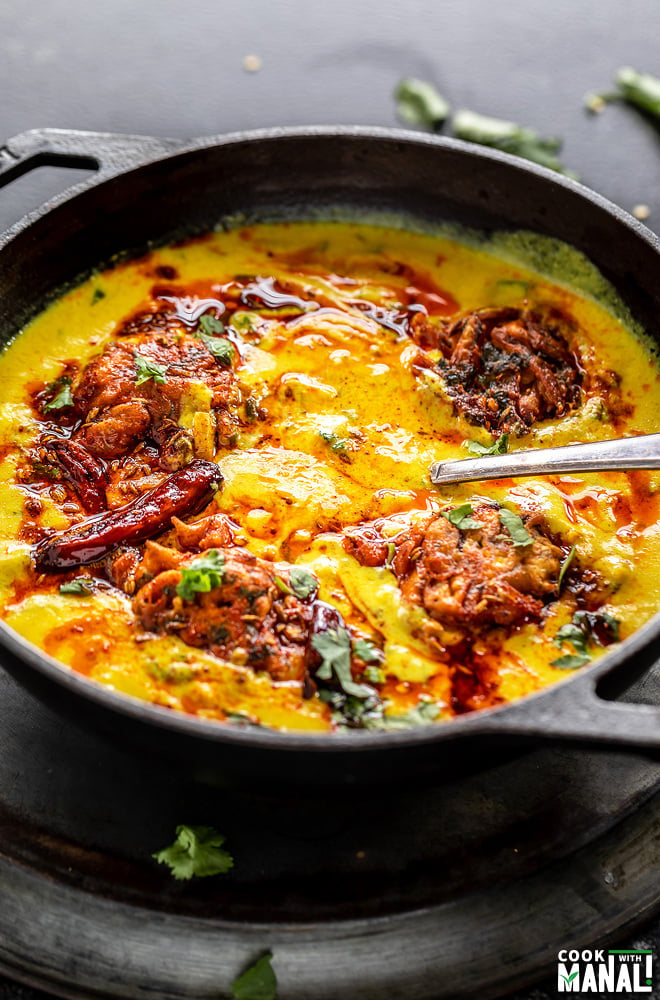 If you’ve tried Punjabi Kadhi Pakora Recipe then don’t forget to rate the recipe! You can also follow me on Facebook and Instagram to see what’s latest in my kitchen! 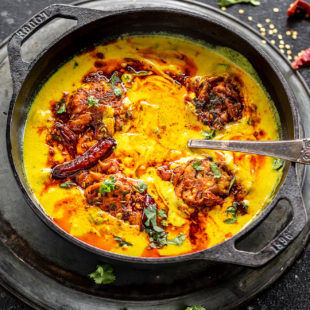