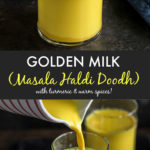 Turmeric’s anti-inflammatory and healing properties makes this Golden Milk aka Haldi Doodh, an ideal drink to have when you are under the weather or just when you feel like having a comforting drink!

PS: Happy Holidays & Merry Christmas everyone! I am taking a break from blog for the holidays and will see you guys in January! Have a wonderful time! 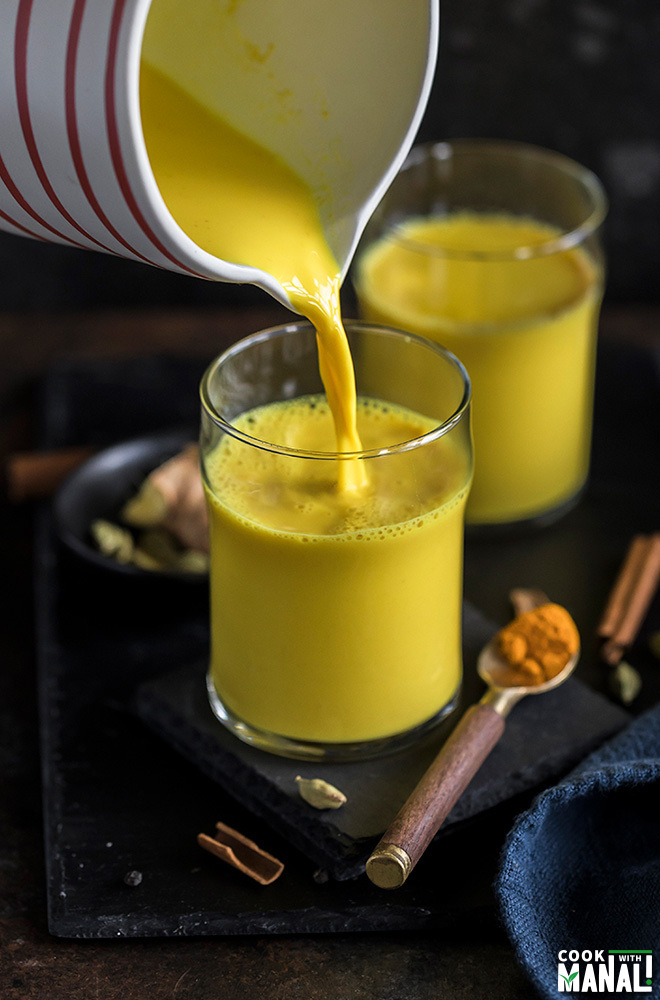 India has a very rich culture and so much has been said about it over the years. Of late, I have started realizing that the things which we took for granted in India have suddenly become a rage in the western world.

Isn’t it amazing how things I grew up with have suddenly attracted so much attention, it amazes me sometimes.

Turmeric- so much has been said about it’s benefits and healing properties. I see turmeric tablets at Costco now, it has become that popular in the US these days.

As an Indian, I grew up eating turmeric everyday of my life. We ate dal and veggies everyday and every dal and veggie had turmeric in it so we had it for lunch and dinner both.

Turmeric or haldi as we call it in Hindi is an integral part of Indian cooking. It’s one of those core spices without which you can’t cook Indian food. It’s added to pretty much everything in India from lentils to veggies to pickles, rice – you name it!

I must tell you guys that turmeric truly has amazing healing properties. Whenever I would hurt myself and had a bump on my head or a chronic deep pain which refuses to go, my mom would make a paste of onion and turmeric. 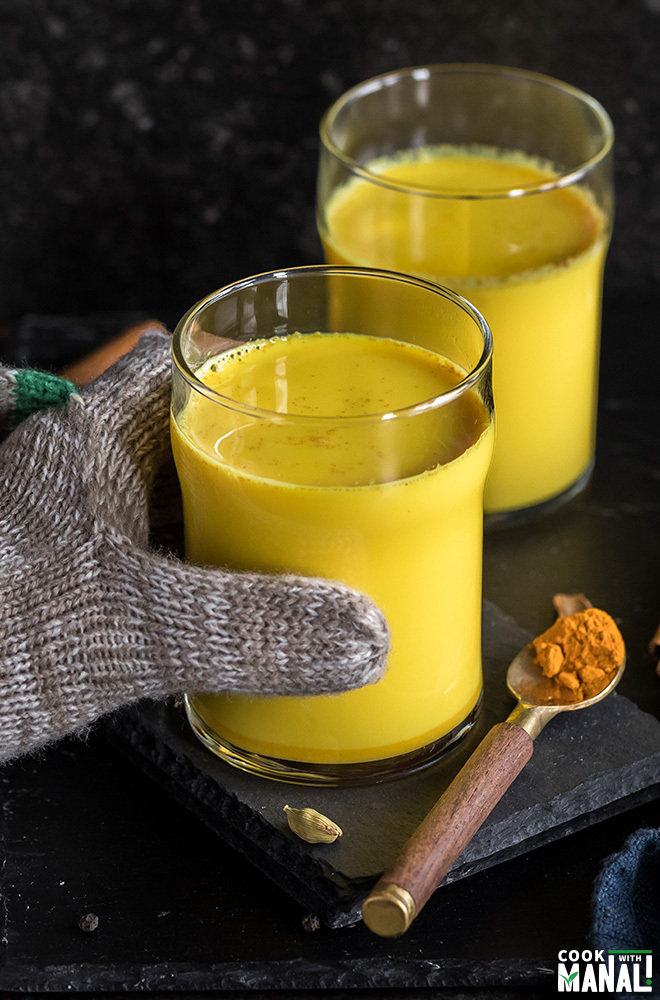 She would heat these two things together (until it was piping hot!) and then place that onion-turmeric paste on the spot where I had the pain and tie it with a piece of cloth. For it to be effective, it had to be applied while it was hot.

Trust me, the pain just disappeared next morning! Sometimes, if it was a chronic kind of pain, it would take 2 to 3 days for it to go but it eventually always went away. It was magic!

What is Haldi Doodh aka Golden Milk

One thing which I grew up having pretty regularly was Haldi Doodh (haldi=turmeric and doodh=milk) or what is commonly known these days in the western world as Golden Milk. It’s nothing but milk mixed with ground turmeric.

My mom would make me drink it whenever I was not feeling well or was under the weather or had a deep pain which was refusing to go.

As a child, I wasn’t very fond of haldi doodh. Who would have thought that such a simple drink would become all the rage when I grow up! 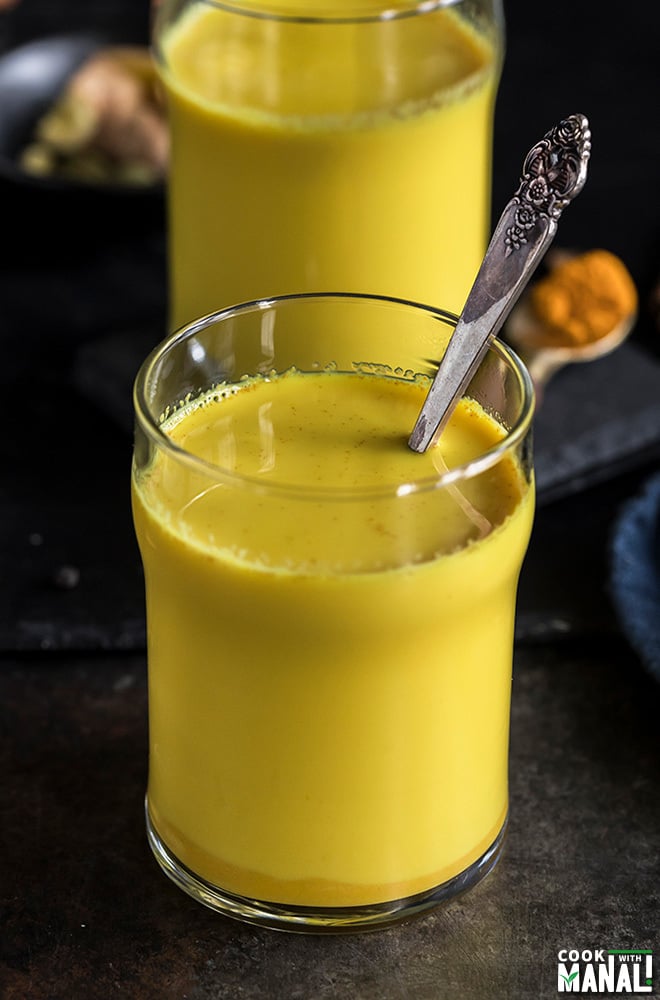 How to Make Turmeric Milk/Golden Milk

My mom made it with only 2 ingredients- milk and turmeric. So she would stir milk with turmeric powder in a pot and bring it to a simmer. You could then sweeten if you wanted but that was about it, she didn’t add any spices to it.

But now that I make it on my own sometimes (oh and now I don’t mind it at all like I used to when I was little), I add in a lot of spices (masala) and hence I call it Masala Haldi Doodh.

You can use milk of choice for this recipe. I have tried this recipe with regular and almond milk and it works well with both. It’s also good with cashew milk!

Once you have chosen your milk, just add the milk along with the turmeric and all other spices and sweetener to the pot and bring to a light simmer. You don’t really want to boil it but you want the flavors to mix-in together. 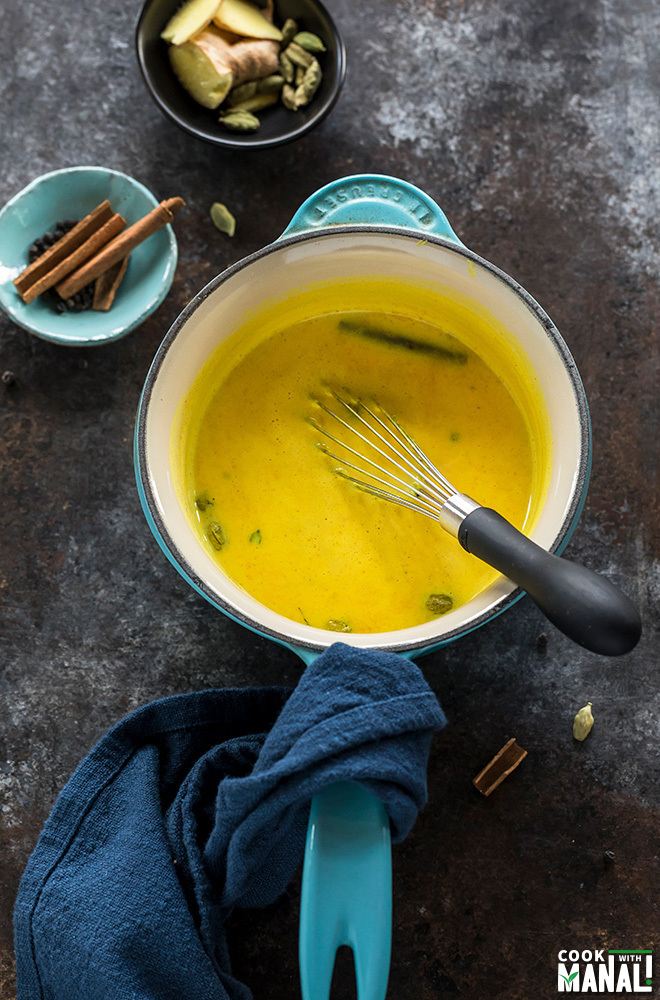 Since my version of golden milk is heavy on spices, here’s a list of spices that I have in my golden milk recipe: 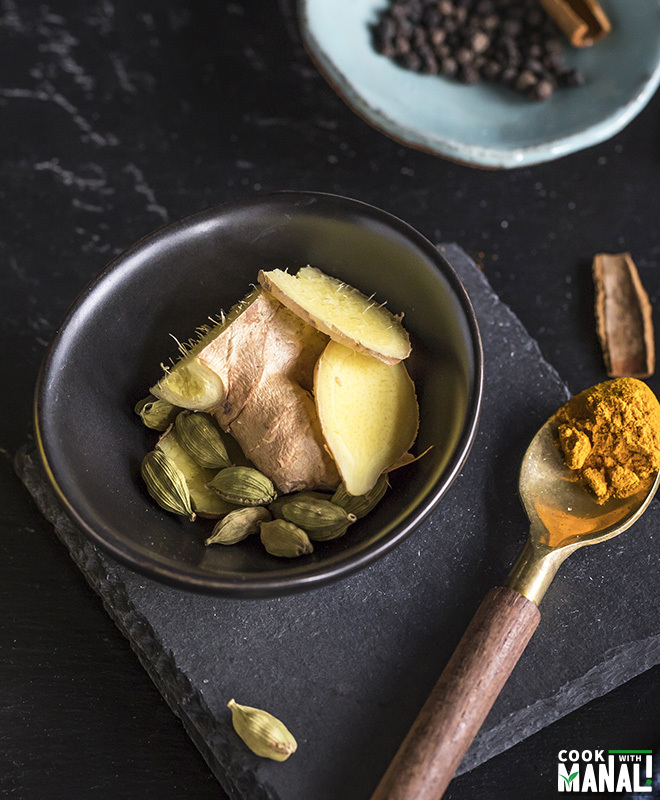 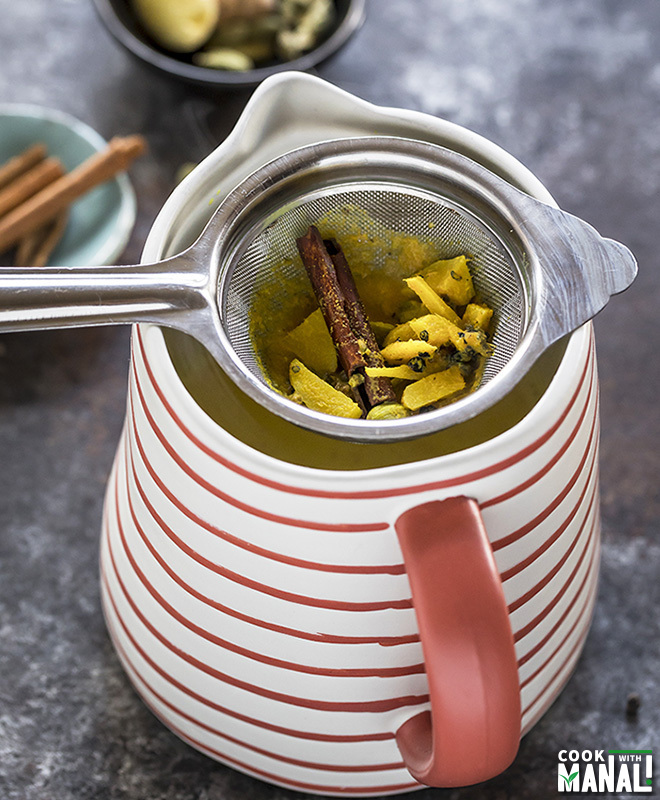 I love my haldi doodh with a lot of spices hence the long list. If you don’t want any spices, feel free to drink it just plain with milk and turmeric – just like my mom made it.

Another spice which I love to add to my haldi doodh is nutmeg, just a pinch of it and it goes really well.

Once your golden milk is all done and ready to serve, I like to sprinkle it with cinnamon or cardamom powder before serving. It’s totally optional.

I hope you guys like my version of the humble haldi doodh. Mom always made me drink it at bedtime, I guess it helped in getting a sound sleep too. Whether you drink it at bedtime or any other time of the day, it definitely makes up for a comforting drink.

1- Add milk to a pan on medium heat. After a minute or two (when the milk is little lukewarm) add turmeric powder to it.

3- Add in the sweetener.

4- Whisk it all together and bring to a low simmer for 5 minutes. You don’t need to boil it but it should be nicely hot throughout. 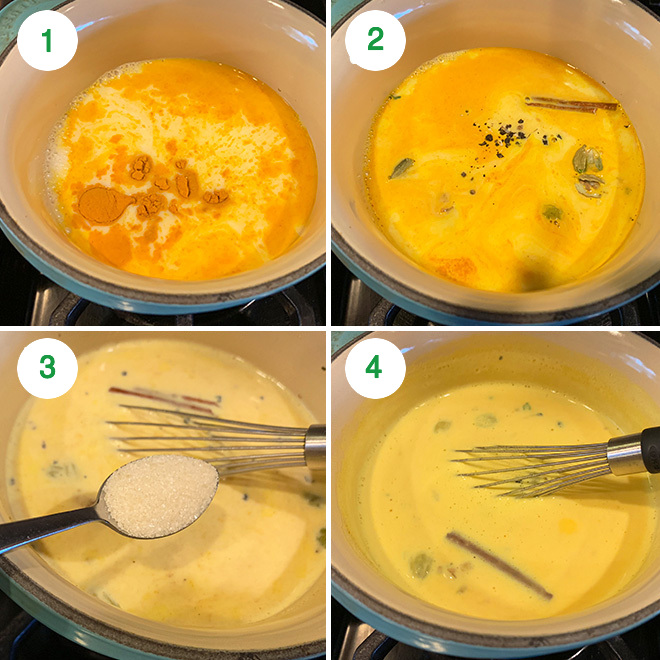 Remove pan from heat, cover pan with a plate or lid and let it sit for another 5 minutes for the flavors to steep in. Strain the golden milk using a strainer into serving cups.

Serve warm! You may sprinkle with cardamom or cinnamon powder before serving. 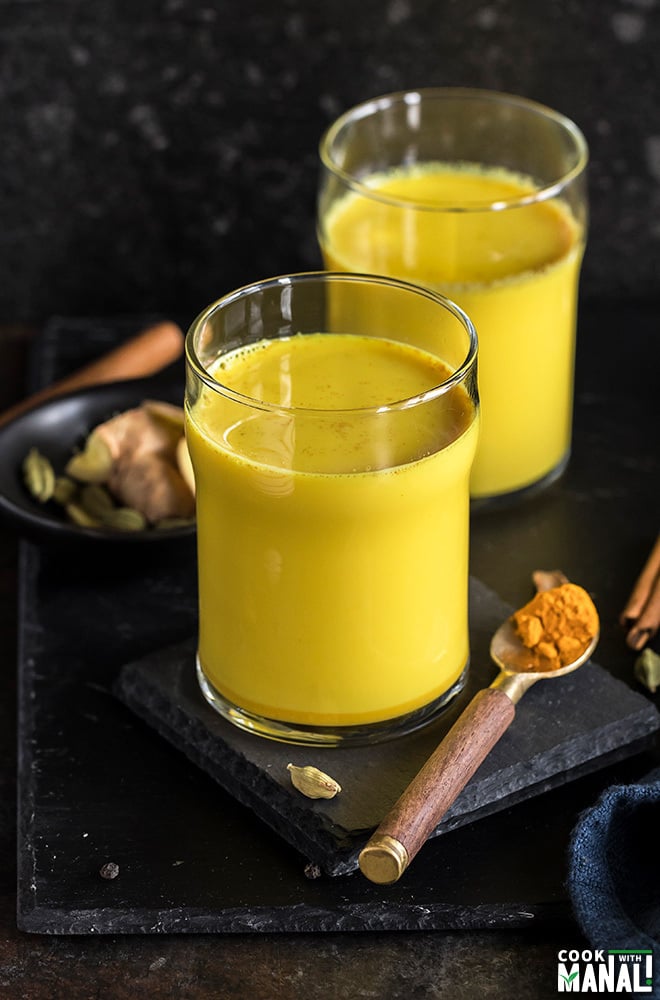 If you’ve tried this Golden Milk Recipe then don’t forget to rate the recipe! You can also follow me on Facebook, Instagram to see what’s latest in my kitchen! 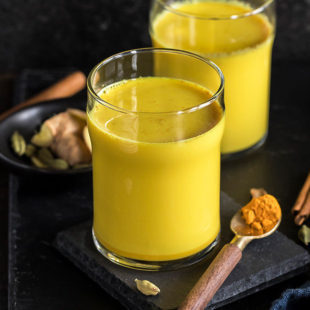 Manali
Golden Milk aka Haldi Doodh is a comforting drink made with milk, turmeric and warm spices. Turmeric's anti-inflammatory properties makes it a perfect drink to have when you are under the weather or just when need a little pick-me-up!
5 from 14 votes
Print Recipe Pin Recipe
Follow me on YouTube!Subscribe to my channel and never miss my video again.
Cook Time 10 mins
Total Time 10 mins
Course Beverage
Cuisine Indian
Servings 2
Calories 194 kcal 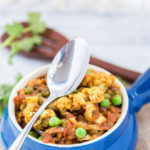 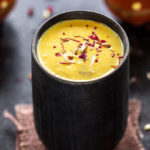 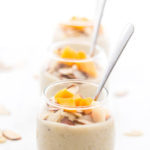 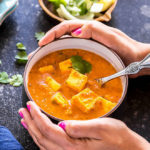 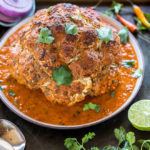 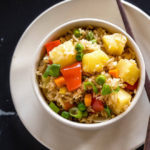 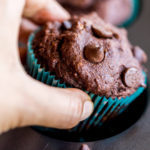