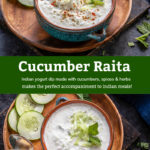 It’s cooling and refreshing flavors go so well as a side with curries or you can also use it as a dip. 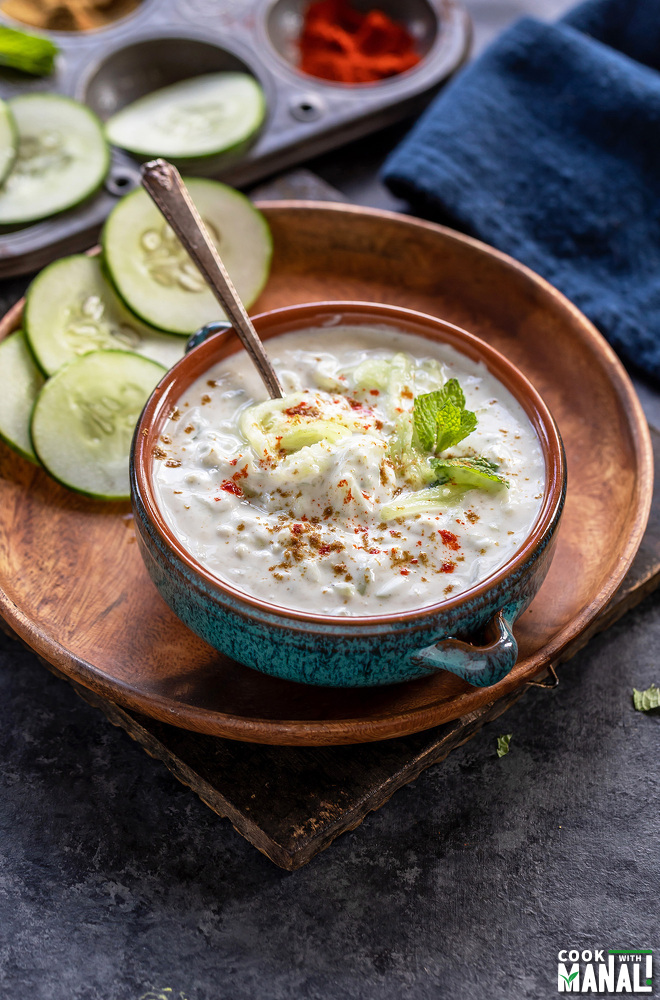 Raitas have always been an indispensable part of Indian food. Growing up, there was always a raita on our lunch for most days.

Especially during summers, I don’t remember we ever had our lunch without a side of raita.

If you have never heard of it before, raita is like a yogurt dip which is mostly seasoned with spices like cumin and is served as a side dish to Indian meals.

You can make a raita out of many things from deep fried boondi (small deep fried balls made of gram flour) to veggies and fruits. The process is always very simple- whisk the yogurt, season it lightly and add in the ingredients you want to make the raita for.

The most common types of raita that I grew up eating was boondi raita and cucumber raita.

There are several other raitas which my mom made depending on what was in season.

Like there was an onion, tomato, cucumber mixed raita during summers and a spinach or bathua (chenopodium) raita that she would make during winters.

I even make a mango raita when mangoes are in season. It is so good, trust me!

Since raita is made with yogurt, it has a cooling effect and thus it pairs well with Indian food which almost always has  spices.

Now, let’s talk about this cucumber raita. Like I said, it was one of the most common raitas that I grew up eating.

Especially during summers when cucumbers were in season, we had a bowl full of this everyday.

Cucumber: that is obviously the main ingredient for this raita. I have used regular long cucumber here. Try to use a cucumber here which doesn’t have a lot of seeds.

You can either peel and grate the cucumber (like I have) or you can also chop or dice it.

Yogurt: plain whole milk or low fat yogurt is what works best for raita. The consistency of raita is a personal preference so you can always adjust the consistency to preference.

Spices: I have used cumin powder, kala namak and chaat masala here. This is how I like my raita, you can add nothing at all except regular salt if you like.

So, make the adjustments accordingly. I have added very little salt in the recipe since it also uses black salt so be careful about that.

Herbs: I love mint in my raita but you can also use some fresh cilantro.

Some people also like to add tadka (tempering) to their raita. Typically it’s a tempering of cumin seeds, chilies. I don’t do it since I never saw my mom do it so I prefer the simple raita but that’s definitely an option.

You can also add sugar to your raita to balance out the flavors especially if the yogurt is quite sour. I have not added any sugar here.

This raita has a medium consistency, it’s neither very thick or very thin. I do not add any water to the raita though since cucumber releases a lot of water.

So, when you grate and add cucumber to the yogurt, it releases water and that thins out the raita.

It also becomes thinner as it sits so my recommendation would be to not add a lot of water in the beginning.

Cucumber raita and tzatziki: You might confuse cucumber raita with tzatziki sauce. They are both kind of similar but yet have their differences.

The raita is on the thinner side while tzatziki is thicker. Raita is always made with regular yogurt while Greek yogurt is often used for tzatziki .

They also have difference in the seasonings and herbs that are added to them. The cucumber raita often has cumin, black salt whereas tzatziki has lemon juice and olive oil.

Making the raita vegan: you can make this raita vegan by using a non-dairy yogurt. My recommendation would be plain almond milk yogurt.

Raita is always served as a side to Indian meals. It goes so well with rice dishes especially like mushroom biryani or vegetable biryani.

It’s also served as a side with a complete Indian meal of dal, roti and sabzi (like aloo gobi, bhindi masala etc.).

You can serve it as a dip but honestly I never saw that being done in my house. But it’s definitely an option. You can serve it with some roasted veggies or carrots or celery sticks.

Before, you start peel the cucumber and grate it using a grater.

1- To a bowl add plain milk yogurt and whish it until smooth.

2- To that now add, chaat masala, kala namak, cumin powder and salt. Mix until spices are well combined with the yogurt.

3- Then add the grated cucumber to the yogurt and mix.

4- Stir in the chopped mint leaves and mix. 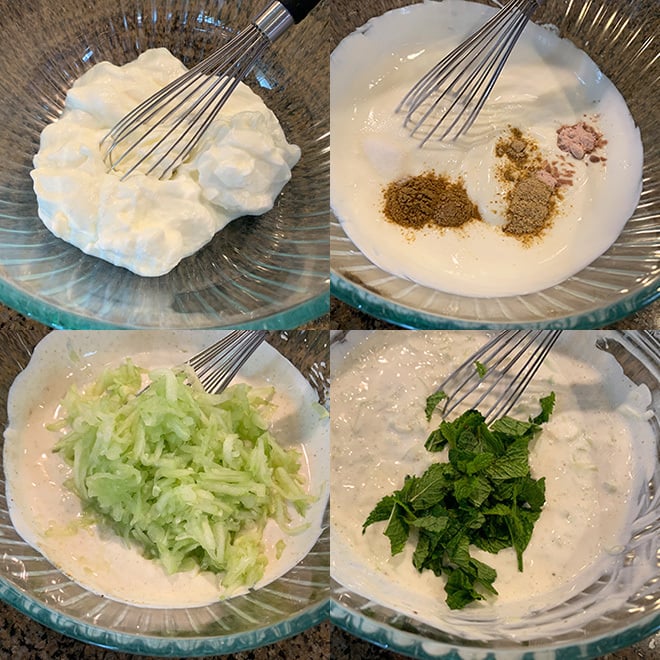 Garnish with mint and serve cucumber raita as a side with any Indian meal or with biryanis and pulao. You may sprinkle some cumin powder on top before serving. I also sprinkle some kashmiri red chili powder (not hot) for presentation. 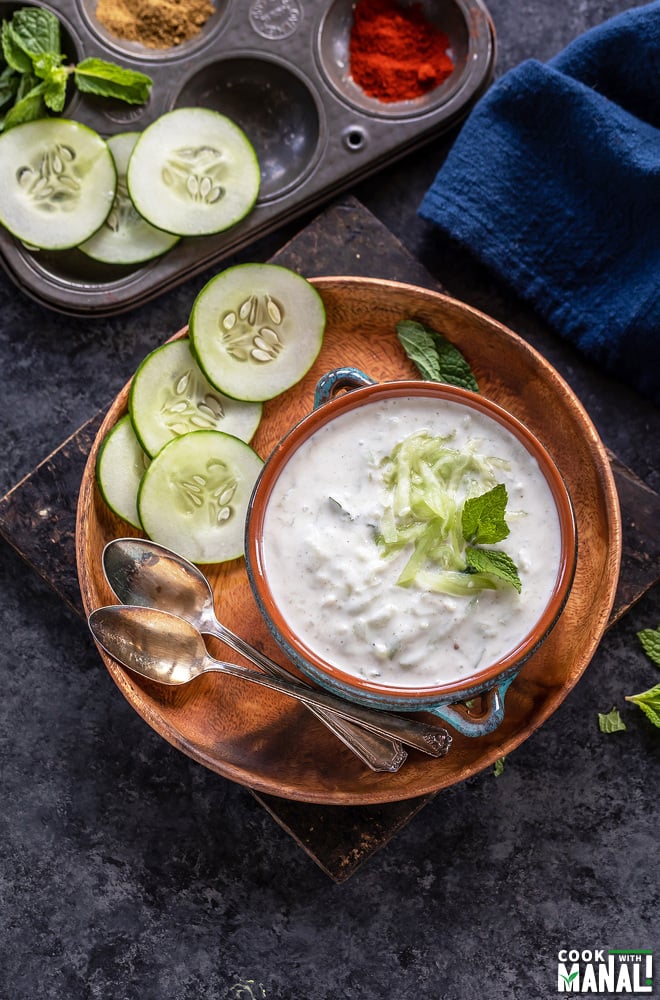 If you’ve tried this Cucumber Raita Recipe then don’t forget to rate the recipe! You can also follow me on Facebook, Instagram to see what’s latest in my kitchen! 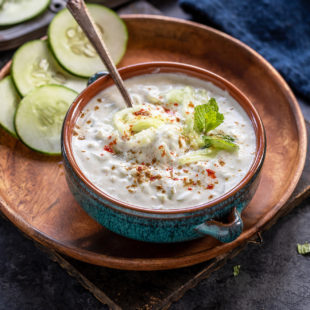